Last night, Colombian Minister of Foreign Affairs Carlos Holmes Trujillo posted a video statement on his Twitter account in which he claimed that three Venezuelan citizens had been arrested in connection to a plot to assassinate president Ivan Duque.

Below, Holmes’ statement along with my translation:

Carlos Trujillo Holmes: I express my solidarity with the President of the Republic, Dr. Ivan Duque, [as well as] my great concern about and rejection of the possible attempts against his life. I want to inform you that we are unveiling to the international community [the fact that] intelligence investigations have been ongoing over the past several months about possible plots against the life of the president.

To this we add the capture of three Venezuelan citizens, whom we found in possession of armamento de guerra [literally, “war weapons”, meaning weapons like assault rifles, grenades, etc.], which increases the concern that authorities have had about this issue.

In light of this concerning event, I want to thank the attitude of the authorities from other nations for contributing to maintaining the well-being of the president. At the same time, I want to ask our citizens to inform us about anything that might relate to potential attempts against the life of the president of the republic.

Colombia’s Blu Radio claims that the three Venezuelan citizens were arrested in the cities of Valledupar and Barranquilla. According to Blu Radio, the men were in procession of “rifles… and telescopic sights”, and named two of the suspects: Jose Vicente Gomez and Pedro Jose Acosta.

The pair were arrested while traveling by bus on December 28. Below, an image of the pair following their arrest along with the weapons that they allegedly had in their possession, courtesy of El Pilon: 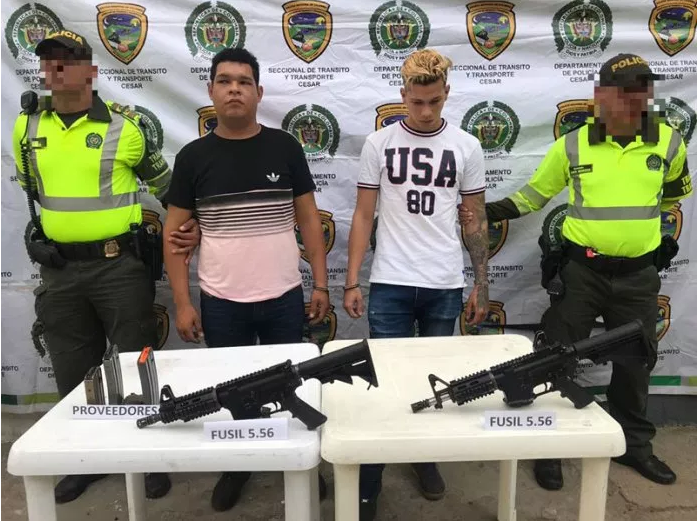 Blu Radio also reported that Bogota first became aware that Duque’s life might be in imminent danger three months ago.

Venezuelan Minister of Foreign Affairs Jorge Arreaza posted a series of tweets on his official account calling on the Colombian authorities to loop Venezuela into the investigation. Below, one of his tweets:

We are still trying to communicate with foreign affairs minister [Carlos Holmes Trujillo] without any luck. If the Colombian authorities have reliable information, they should not waste time sharing it. Before such grave allegations, opportunity is key [sic].