Earlier this evening, I attended an event at the Munk School of Global Affairs at the University of Toronto called “Resolving the Venezuelan Crisis”. The event featured former Venezuelan attorney general Luisa Ortega Diaz. She was joined on stage by the following panelists:

The event was split into two panels. The first panel included Freeland, Way and Cotler, while the second included Hausman, McCoy, Ortega Diaz, Frankel, and Way.

Below, my summary of the event, along with some thoughts on what I experienced today.

For a full video of the event, click here.

The first panel was moderated by professor Lucan Way, one of the world’s foremost political scientists. The panel was made up of Chrystia Freeland and Irwin Cotler. Freeland is the Canadian Minister of Foreign Affairs; Cotler is a world-leading human rights activist.

During this first panel, Cotler spoke on his work at a set of meetings organized by the Organization of American States (OAS) earlier this year exploring the possibility that Maduro regime officials may have committed crimes against humanity in their continued quest to hold on to power.

Cotler told the audience that he was deeply troubled by the “pervasive and deepening humanitarian crisis” in the country. He also said that most disturbing for him was the fact that the Maduro regime refuses to acknowledge that the crisis exists, a fact that he suggested “may amount to a crime against humanity”.

When asked what kind of international pressure he thinks is more likely to affect political change in Venezuela, Cotler said that building “critical mass” outside of Venezuela to identify, document and denounce the ongoing human rights violations in the country would be critical. In this respect Cotler sounded hopeful, saying:

I have never seen such an effective diaspora as the Venezuelan diaspora in Toronto.

During her turn at the microphone, Freeland argued that Canada had an interest in seeing a peaceful and prompt solution to the Venezuelan crisis because the country is “in our neighbourhood”. Freeland pointed out that the effects of the crisis were rapidly “spreading over the border to Colombia and Brazil”, and argued that the risk for this to become a regional crisis could not be dismissed.

Freeland also said that Canada “firmly believes that a political solution is possible and essential” in Venezuela, and stressed that the solution “must be found by the people of Venezuela”. Still, Freeland argued that it was important for the international community to let the people of Venezuela know that they were not alone in their struggle, and that their suffering was not being ignored. She said:

We need to give people hope… the regular people need to know that they are not alone.

The second panel was moderated by Jonathan Hausman, an economist who has done work on Venezuela. The panel was made up of Jennifer McCoy, director of the Global Studies Institute at Georgia State University; former Venezuelan attorney general Luisa Ortega Diaz; Gary Clyde Hufbauer, senior fellow at the Peterson Institute for International Economics; and Lucan Way.

The image below shows the members of the second panel. From left to right, Hausman, McCoy, Ortega Diaz, Hufbauer, and Way: 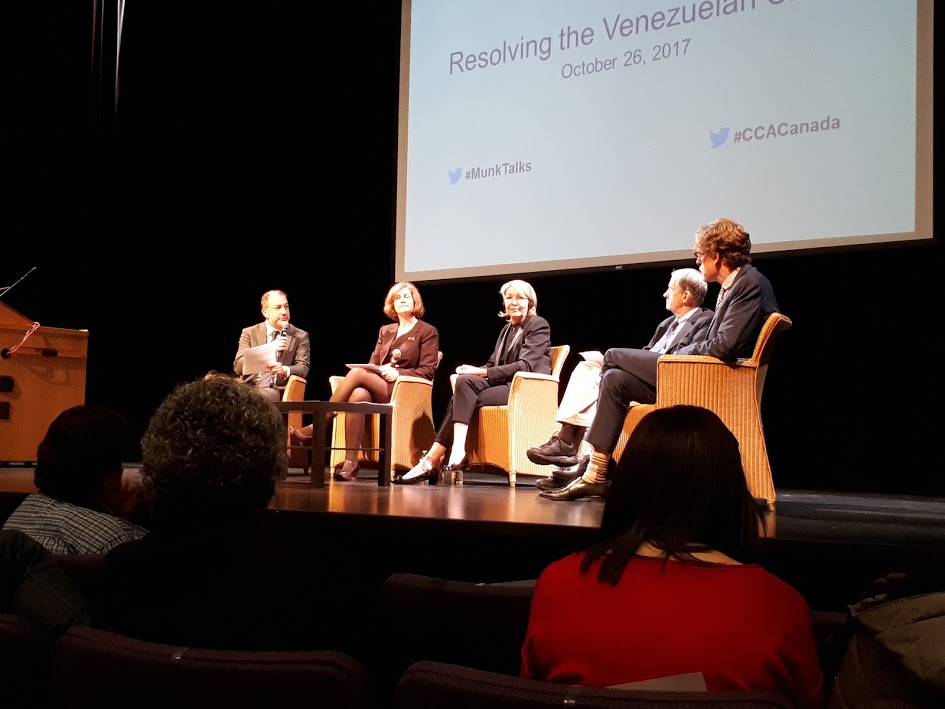 The second panel was briefly interrupted when a group of protesters stormed the stage carrying banners and chanting slogans. The demonstrators appeared to be protesting against what they believe to be international intervention in Venezuelan affairs. After a few minutes, the protesters left the stage and the panel was allowed to continue.

During the second panel, McCoy Way and Hufbauer spoke largely in agreement with each other on the fact that Venezuela is a dictatorship, and that the Maduro regime has been very successful at hanging on to power. The three also agreed in saying that the regime is likely to continue to exist into the near future.

Way was blunt in his assessment, saying that Venezuela was a dictatorship whereas two or three years ago he would have considered it a hybrid regime containing elements of both a democracy and a dictatorship. More specifically, Way said that the Maduro regime is an autocracy, and that “autocracy can almost always survive” as long as it can keep the autocrats happy and unified. Way explained that he believes that this will be the case into the near future.

Hufbauer agreed, saying that “autocracies tend to be long-lasting”. However, Hufbauer also spoke of what he considers to be a potential way to bring a more immediate end to the Maduro regime: “serious financial sanctions” that target the country’s economy and oil industry. Hufbauer estimates that sanctions that are severe enough might bring an end to the regime “within one or two years”.

However, he was careful to point out that bringing an end to the Maduro regime was not the same as restoring stability to Venezuela, or improving the situation in the country. He warned that regime change does not always lead to improved conditions, and that the result of the Maduro regime collapsing could be “chaos”.

Ortega Diaz–who spoke in Spanish, blaming her “terrible English”–spoke highly of the struggle for human rights and democracy in Venezuela. Carefully sidestepping her key role in the Chavez and Maduro regimes up until April of this year, Ortega Diaz said that she had evidence of regime crimes that she was ready to take to the International Criminal Court at the Hague.

There was a period of approximately 15 minutes at the end of the second panel in which Hausman received written questions from the audience and selected which ones to ask. He did not ask any questions challenging Luisa Ortega Diaz or her role in the Chavez and Maduro regimes.

I can’t say that I liked or did not like tonight’s event. I can only say that I experienced it. It was surreal for me to hear Ortega Diaz talk about her work promoting human rights and democracy in Venezuela, when she was instrumental in dismantling those very principles through her nine years as attorney general. Hearing her speak about the sorry state of the country and about the urgency of finding a solution to the crisis bordered on the absurd given the key role that she played in creating the crisis. This was particularly true when she spoke about the human rights abuses committed against political prisoners and dissidents, a great number of which happened directly under her watch.

I thought that someone not familiar with the whole story would listen to Ortega Diaz speak and think that she was the leader of the Venezuelan resistance, a tireless human rights advocate who had been on the front lines of the struggle against the Maduro regime for years.

At the end of the event, eager audience members approached Ortega Diaz to shake her hand and speak to her. I was one of them. I did not shake her hand, and while I had rehearsed a question to ask her I did not get a chance to do so. I did stand close enough to her to hear some of the interactions that she had with the people that approached her.

For the most part, the people that approached Ortega Diaz thanked her for speaking out against the Maduro regime. Only two women, unsuccessfully fighting back tears, reminded her of her role in creating the Venezuelan crisis.

The first woman shook Ortega Diaz’s hand, and clearly shaken told her that she did not agree with the things that she had done. However, the woman explained, she was thankful for her recent decision to do the right thing. The woman told Ortega Diaz that she was a public employee who was forced to flee persecution in Venezuela due to her political beliefs. The two shared a long hug, and I sensed that the gesture and the connection was genuine.

The second woman spoke through uncontrollable tears. She told Ortega Diaz: “Thank you for speaking out, but you were too late”. The woman told Ortega Diaz that she personally witnessed the brutality of the Maduro regime’s repression while she lived in Valencia in Carabobo state, and that she was angry that as attorney general she had not done anything then to put an end to the repression.

It is my impression that at this time, Ortega Diaz and her handlers felt like the crowd was not as warm to her as they had initially thought. As the woman continued to tearfully tell her story, I could see Ortega Diaz begin to grow impatient. Her handlers pulled her away from the crying woman, who I could tell had not found closure in her meeting with the former attorney general.

I’m not sure what I expected to get out of this event. I’m glad that I attended it. I go to sleep tonight feeling like I understand this world a little less than I thought I did, and not knowing how to feel.