Ivan Simonovis, Venezuela’s most famous political prisoner, was moved from his cell in the Ramo Verde military prison to his home, after a judge approved his move into house arrest on humanitarian grounds due to his failing health.

While at home, Simonovis is not allowed to speak to the media, nor is he allowed to use any social media. In addition, at least six SEBIN agents were posted inside the Simonovis home, which Ivan shares with his wife and daughter.

As Venezuelans reacted to the news, the Tribunal Supremo de Justicia – the country’s highest court – stressed that the move to house arrest is only temporary. The court’s press department tweeted earlier this morning:

Tribunal has made temporary humanitarian arrangements with Simonovis; once his health improves, he will have to return to his incarceration site.

Below, a picture of Simonovis in his home today with his wife and daughter: 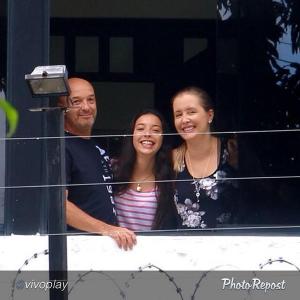 The Simonovis saga, now 10 years in the making, has polarized Venezuelan society due to several controversial facts which surround it.

Simonovis was the top police officer in Caracas during the April 2002 coup attempt. The government accused Simonovis of ordering his officers to fire on pro-government demonstrators during the turmoil, for which he was arrested.

Detained in 2004, his trial did not begin until 2006. By the time he was declared guilty in 2009, the trial had become the longest in Venezuelan history. The trial itself was held in Maracay, hours away from Caracas, which meant that his family and defense team were forced to face lengthy commutes to attend the trial. When the trial finally concluded five years after his arrest, Simonovis was sentenced to 30 years in jail.

More egregious, however, is the fact that the judge who sentenced Simonovis  – Eladio Aponte Aponte – was later forced to flee the country after being accused by the government of having ties to drug traffickers. Once in exile, Aponte made a number of confessions, including having jailed Simonovis on direct orders from Hugo Chavez. In a written statement released in 2012, Aponte said:

It is an urgent duty to confess before you all that I have committed the sin of having told the judges who tried you [Simonovis and others tried in the same case] to sentence you to 30 years in prison any way they could… I was following the instructions of President Hugo Chavez Frias, who ordered me to do so.