Maduro gave the Venezuelan equivalent of the state of the union address today. He made a familiar set of promises and announcements, providing ample evidence that his regime will not depart from the economic policies that have destroyed the Venezuelan economy over the past six years.

Maduro announced a 300% increase to the minimum monthly salary, from BsS. 4,500 to BsS. 18,000. The increase comes into effect tomorrow. The BsS. 4,500 minimum salary came into effect on December 1 of last year, meaning that it barely lasted a month and a half before it was made obsolete by the country’s runaway inflation.

At the current black market rate, the new minimum monthly salary amounts to about $6.06.

After his speech, Maduro greeted some supporters who had been staged on the grounds of the National Assembly:

Regime Contradicts Self as Maduro Decrees Price of Petro

Maduro also spoke about the Petro during his speech, the regime’s flailing custom-made cryptocurrency. Launched last year, the initiative has been called “one of the worst investments ever” given the fact that it is almost certainly doomed to failure.

Late last year, the regime released a white paper outlining some of the Petro’s inner workings, including the formula that would be used to calculate its value. Below is that formula as it appears on pages 5-6 of the white paper: 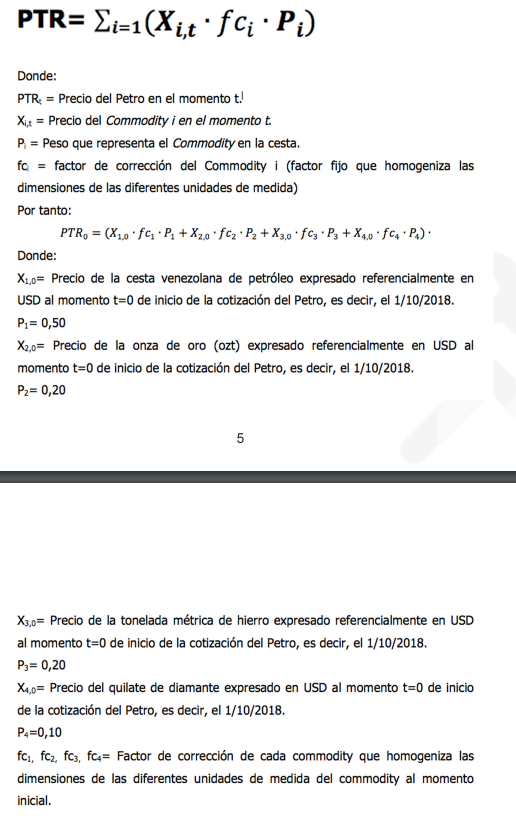 The formula suggested that the value of the Petro would be decided by a complex set of variables that, for the sake of transparency, were made available to the public.

However, Maduro destroyed any semblance that the regime was taking the formula seriously today when he dictated the price of the Petro, rendering the calculation completely meaningless.

I’ve decided, at the start of the year, to make this great struggle against the factors of the economic war more dynamic [by] placing the value of the Petro at BsS. 36,000 [so that] it will adapt beyond the attack that we’ve been receiving [sic].

The fact that Maduro decrees the value of the Petro means that, by definition, it is not a cryptocurrency as the regime has repeatedly tried to claim.

National Assembly president and leading opposition figure Juan Guaido responded to Maduro’s speech through his Twitter page in a set of messages:

After 3 hours and 47 minutes of only lies, it became clear that Nicolas Maduro is desperate to defend himself before a people who no longer believe his words, who are tired of his racket and the bad policies that have taken us to the worst crisis in our history.

Nicolas Maduro is trying to make the Venezuelan people believe that he has control of everything, but the truth is that he doesn’t even control his own political group. Today even his own repressive forces are scattered because the chain of command has been broken, because he is a USURPER.

Today, Nicolas Maduro laughs at the Venezuelan people, once again, by taking economic measures that only bleed even more Venezuelans’ pockets.

The Venezuelan economy will not improve with a salary increase!

Only the criminal’s logic explains the nonsense announced by Maduro the dictator.

Besides being illegitimate, these “measures” are DESTRUCTIVE.

Companies, businesses, the financial system, jobs, salaries and savings, shaken to the core.

We must get rid of them right away.

National Assembly deputy and economist Jose Guerra called Maduro’s salary increase “inflationary”, and that the measures would do more harm to the Venezuelan economy “without a doubt”.