The Ministry of Foreign Affairs issued a congratulatory note today to Cuban President Miguel Diaz-Canel for ascending to the top of the island nation’s political structure. Diaz-Canel was officially named President of Cuba this morning by the National Assembly. With the announcement, Diaz-Canel became the first non-Castro to rule over country since the end of the Cuban Revolution in 1959.

In its statement, the Maduro regime congratulated the nation of Cuba for conducting Diaz-Canel’s election in “impeccable, democratic and participative” manner.

Diaz-Canel had served as Raul Castro’s number-two man since 2013. He was named president by the National Assembly in a secret vote, after running as the only candidate to replace Castro.

The statement praises Diaz-Canel as a “loyal representative of the brilliant generation that was born, grew up and was forged in the Cuban Revolution”, and expressed joy at the fact that it considers his election a guarantee that Cuba will continue to be “free, sovereign and socialist” for the foreseeable future.

The statement also includes a statement of support, which reads:

President Diaz-Canel and the revolutionary People of Cuba can count on the unconditional support of President Nicolas Maduro and the Bolivarian Revolution, to strengthen our union even more so that we may together face the challenges and battles for social justice and human development in this tumultous world in the months and years to come.

The Senate of the Republic of Mexico issued a statement yesterday condemning the Maduro regime’s handling of the May 20 presidential election, and left the door open for placing travel and financial sanctions against high-ranking regime officials in response. The statement was issued by the Senate’s Foreign Affairs Commission.

In the statement, the Commission said that the May 20 presidential elections “do not count on the minimum guarantees” to make the vote “free, fair and just”. It also lamented the fact that the electoral system in Venezuela is run by the Consejo Nacional Electoral (CNE), an organization that it believes is “dominated by officials that are loyal to chavismo”.

Spanish Minister of Foreign Affairs Alfonso Dastis announced today that Venezuela and Spain would once again exchange ambassadors, and that diplomatic relations between the two countries would be normalized.

The relationship between Venezuela and Spain has been strained in recent years, as Maduro often blames the Spanish government for problems at home. Most recently, the two countries severed diplomatic ties in January of this year due to Spain’s backing of European Union (EU) sanctions against regime officials.

Maduro reacted to the news by saying that the government of Spanish Prime Minister Mariano Rajoy “was the most corrupt in [the] history” of Spain, and accused the Spanish leadership of being a “racist [and] colonial oligarchy”.

Dastias spoke on the importance of restoring ties by saying that it was important to help Venezuela find a “peaceful and democratic” solution to the crisis.

Maduro tweeted a message early this morning to mark the 201st anniversary of the Battle of San Felix, which saw the armed forces of a young republic defeat the Spanish empire in what became Venezuela’s western region of Guayana. The message included a patriotic note in which he called the battle “legendary”.

The tweet was accompanied by an image that Maduro evidently believed belonged to the period and/or portrayed Venezuelan soldiers fighting in the War of Independence against Spain. The image shows a ferocious cavalry line charging forward (note: I’m sharing an image of the tweet in case Maduro deletes it): 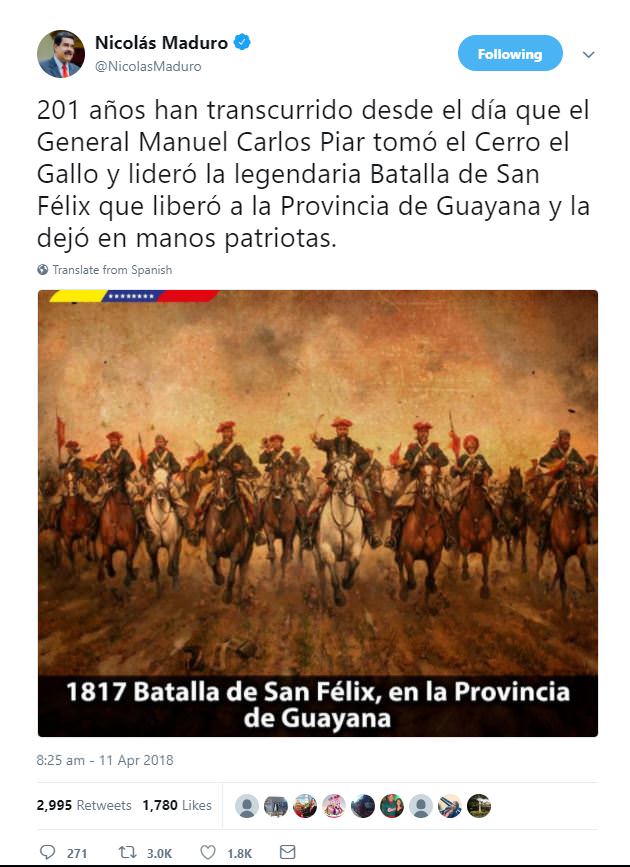 The image that Maduro shared is in fact that of a painting by Spanish artist Augusto Ferrer-Dalmau called “Carga de Zumalcarregui”, and in fact depicts Spanish Carlist forces.