Venezuelans are gearing up for another highly contested election tomorrow, as millions are expected to turn out and cast their ballots in the long-awaited gubernatorial elections. The elections–which should have happened last year, but were mysteriously delayed by the regime–will decide who governs over each of the country’s 23 states.

Socorro Hernandez, one of the rectors at the Consejo Nacional Electoral (CNE), reminded Venezuelans to check the official CNE website, or to get in touch with the organization through text message or telephone, in order to make sure that they understood where to vote tomorrow.

Amid widespread claims of electoral fraud meant to confuse voters and dissuade them from taking to the polls tomorrow, the Mesa de la Unidad Democratica (MUD) opposition bloc called on all Venezuelans today to cast their ballots tomorrow in defiance of the Maduro regime. During a press conference earlier today, opposition leader Freddy Guevara said that

Despite repeated regime claims that the Venezuelan electoral system is free and fair, evidence to the contrary appears to never be in short supply.

Earlier this year, the CNE, the regime body in charge of organizing and holding elections, launched an SMS service meant to inform Venezuelans about where the vote in elections. By sending a text message with their national ID number to 2406, an automated number that will reply with a message indicating the user where they are registered to vote.

Las night, a source in the country used the 2406 SMS information system, and received a text message that contained not only the individual’s voting centre information, but also an advertisement for the local PSUV candidate.

Below, the message in question: 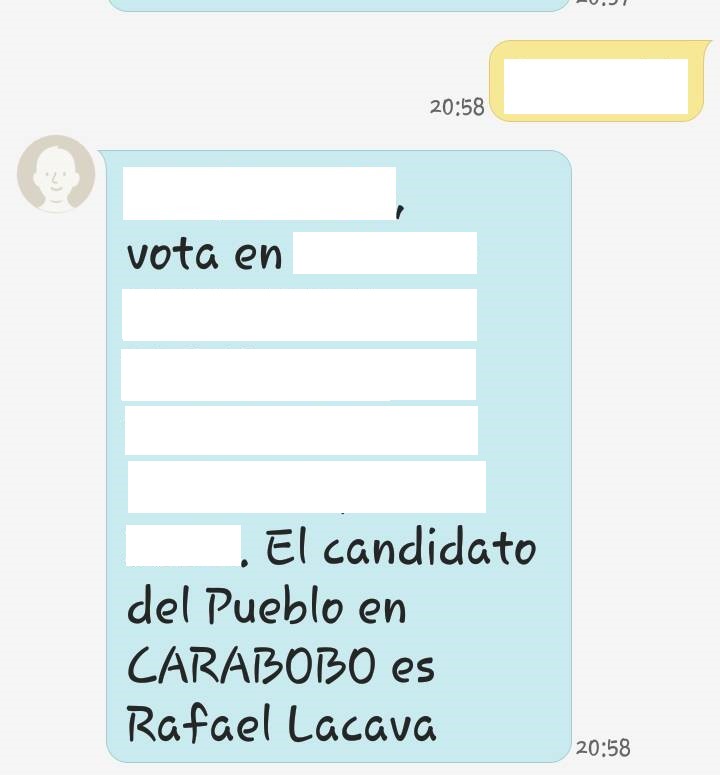 In the image above, the source sent an SMS message to the official government service at 2406 with their national identification number. The reply from the service–the blue box–contains the following text:

[Individual’s I.D. number], vote in [name of the voting centre]. The People’s candidate in CARABOBO is Rafael Lacava.

The ambiguous wording of the message does not make clear which party Rafael Lacava is running for. Lacava is in fact the PSUV candidate in Carabobo state.

Regime Cracks Down on Radio, TV Stations Over Propaganda

The Comision Nacional de Telecomunicaciones [National Telecommunications Commission] (CONATEL), the regime’s radio and television regulator, issued a stern warning today to the country’s private broadcasters over the airing of regime propaganda. The warning came out of a concern at CONATEL that some broadcasters were growing increasingly hesitant to air regime propaganda, which is something that they must do by law.

In a statement issued today, CONATEL explained that it had become aware that some broadcasters were not meeting the legal requirement to air propaganda, which it reminds is of an “obligatory nature”.

In Venezuela, the innocuously-named Law of Social Responsibility in Radio, Television and Electronic Media sets out a set of rules for the broadcasting of information in the country. Article 10 of the law says that the government can order radio and television stations to broadcast messages from the government for free.

In its statement today, CONATEL reminded broadcasters of the law, and said that any radio or television station that refuses to broadcast government messages on demand will be fined up to “4% of its gross income”.

Maduro announced today that preparations were underway to celebrate the 100 years of the Bolshevik Revolution in Russia, which brought an end to the Russian Empire and heralded the birth of the Soviet Union.

Maduro made the announcement by saying:

Maduro said that the event had to be celebrated because it was the “first working class and farmers’ revolution in history, in humanity”.

Speaking during a televised address last night on the state-owned VTV television channel, Maduro spoke on his expectations for tomorrow’s gubernatorial election. With 20 governorships on the line, Maduro said that he expected that his PSUV would score a “miraculous victory” tomorrow.

During his address, Maduro launched into vitriolic personal attacks against opposition leaders, including National Assembly president Julio Borges and the head of the Accion Democratica party, Henry Ramos Allup. On the opposition in general, Maduro said:

… [the opposition] cannot rule a country. I’m calling on everyone to open your eyes and your hearts and vote for the constituent victory of the governors [sic].