With just six days to go before Sunday’s gubernatorial election, the Consejo Nacional Electoral (CNE) warned that it might suddenly move the locations of as many as 205 voting centres across 16 states in a move that will affect approximately 312,000 electors. The unusual announcement came from one of the CNE’s rectors, Luis Emilio Rondon, who broke the news in an interview with Union Radio earlier today.

According to Rondon, the final decision to move the voting centres has not yet been made by the CNE, but there is a distinct possibility that the move could come at any moment. In order to avoid confusion on Sunday, Rondon suggested that registered voters constantly check the CNE’s official website so that they can become aware of any changes to their voting centre as they occur.

The CNE is run by a president ,a vice president, and three rectors. Out of these five individuals, only Rondon is generally understood to be sympathetic towards the opposition.

News of the potential move in voting centres has been corroborated by Eugenio Martinez, a journalist who specializes in electoral issues. According to Martinez, Tachira state is set to see the most voting centres move at 39, followed by Aragua state with 36, Lara state with 28, Zulia state with 12, and Miranda state with “at least 30 voting centres” scheduled to be moved. Martinez pointed out that in the 2015 parliamentary elections, 80% of ballots cast at these centres were for opposition candidates.

The voting centres’ move has not yet been confirmed, and it is not clear if it will happen at all. A press release issued by the CNE at 8:00 PM Caracas time outlining the day’s electoral events made no mention of the plans.

Earlier this week, the Diario Las Americas published an article in which it outlined ten ways in which the CNE is undermining the electoral process in Venezuela for the purposes of assisting the PSUV in winning the vote.

The Food and Agriculture Organization of the United Nations released a report today titled “The State of Food Security and Nutrition in the World”. Among other things, the report measures food security and nutrition in the world’s different regions. According to the report, Venezuela performed the worst out of every country in the region when it comes to undernourishment, posting the greatest gains in the category in all of South America.

Every other country in the region posted decreases in undernourishment numbers during the same period of time. 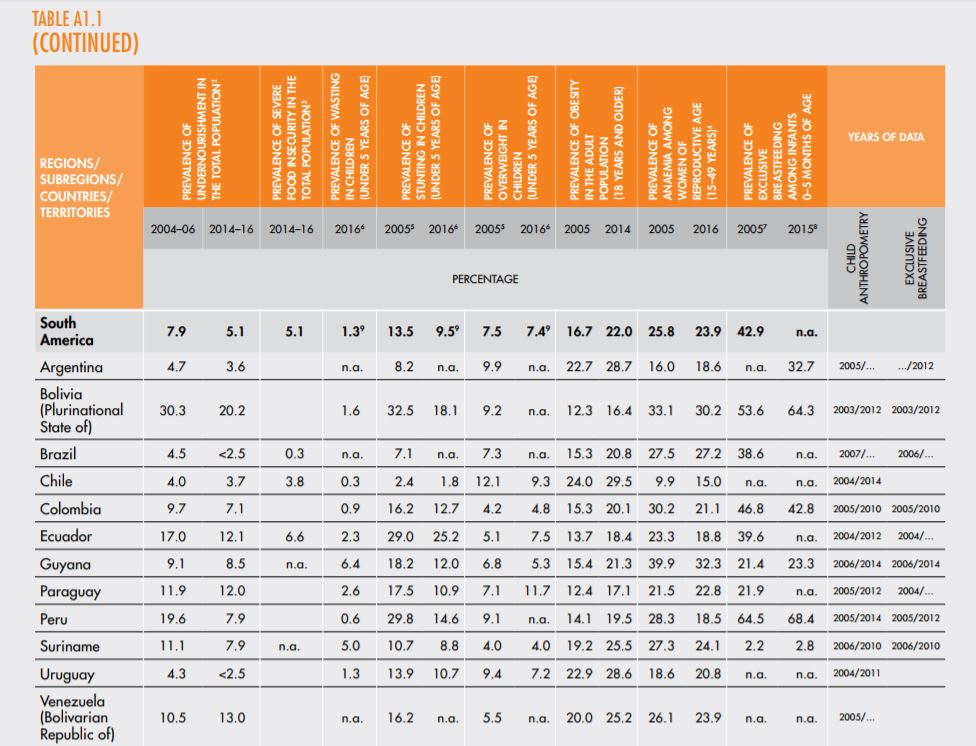 The full report can be found here.

Colombian authorities formally requested to meet with their Venezuelan counterparts yesterday in the hopes of putting an end to the frequent shootouts that are taking place at the border crossing between Tachira state and the North Santander department. The request came via General Gustavo Moreno, who is the regional commander of the Colombian police forces.

Speaking on the necessity of the meeting, Moreno pointed to suggestions that pro-Maduro regime armed militias are taking advantage of the situation at the border for their own purposes. Moreno said that these militias–known locally as colectivos armados [“armed groups”]–are likely behind some of the violence in the area. He explained:

We need to speak to the National Bolivarian Armed Forces and the National Guard as soon as possible. We have information suggesting that there are chavista “colectivos”, as they call themselves, [in the border region], that are taking a very radical position and shooting at one another.

According to El Nacional, there have been two shootings on the Venezuelan side of the Simon Bolivar International Bridge at the San Antonio del Tachira crossing over the past week: one on Sunday and one on Friday. The Sunday shooting lasted 20 minutes and allegedly involved Venezuelan gangs vying for control of smuggling routes in the area and left no casualties, while the Friday shooting left a woman dead and a child injured.

Colombian authorities are concerned partially because of the proximity of the shootouts to Colombia, since some of the bullets fired in Venezuela have managed to reach the country, putting border staff and residents in danger.

The video below was allegedly filmed on Sunday October 8 on the Simon Bolivar International Bridge while a shootout took place [Note: The tweet claims that the video was shot on Monday, October 9. I believe this is incorrect]. It shows a small group of individuals ducking for cover behind a fence while shots ring out in the distance:

The video below appears to have been shot at around the same time and shows the same event, but from a different angle:

The video below shows a large number of pedestrians running in panic both ways across the bridge during a shootout on September 22:

On the danger that the Venezuelan colectivos pose to the area, General Moreno said:

These individuals who operate in the margins of the law did not hesitate in the least to shot into Colombia from Venezuela.