Maduro left Venezuela today soon an international trip that will see him visiting Russia, Belarus and Turkey over the coming several days.

According to El Universal, the purpose of Maduro’s visit to Russia will be to attempt to re-negotiate Caracas’ debt with the Kremlin. Maduro will also participate in a panel as part of an energy summit that is taking place in Moscow this week.

Venezuela owes Russia $4 billion from a loan that it received in June of 2012. Facing an increasingly difficult financial situation, Venezuela has twice asked Russia for a deferral on payment of the loan.

Russian Minister of Finance Anton Siluanov said that it was possible that the two countries could reach an agreement on the debt by the end of this year.

Bloomsberg published an article yesterday in which it points out that Venezuela is facing an unprecedented challenge in the next five weeks: the payment of $3.5 billion in debt with no grace period, a fact that makes the possibility of default much more likely.

In the past, Venezuela has made debt payments that have grace periods. In other words, while the payment is technically due by a certain date, the payment can still be made within a grace period–usually 30 days–before the loan enters default. Most recently, Venezuela failed to make a $30 million payment to a Latin American development bank in June, but that loan allowed for a grace period payment.

The loans due in the next five weeks must be paid by their due date, a fact that some investors fear might trigger an “accidental default”. This is because any type of delay on the debt payment–even an accidental one–would cause the loan to default, given the rigid payment guidelines.

The article points out that the Venezuelan government must make a debt payment of $842 million on October 27, and another one of $1.1 billion on November 2.

The Bloomsberg article ends with the following line:

“The stakes are definitely high,” said Victor Fu, the director of emerging-market sovereign strategy at Stifel Nicolaus & Co. While the probability of an accidental default appears small, “the outcome of delays could be catastrophic.”

Vice President Tareck El Aissami spoke in a televised address this afternoon in which he linked opposition leader Leopoldo Lopez and his Voluntad Popular (VP) party to alleged terrorist activities in the country.

During his address, El Aissami presented what he claims is evidence that Lopez and VP made plans to “sabotage” infrastructure across the country. As evidence, El Aissami provided an audio visual presentation that claimed links between Lopez and VP to individuals he claims were arrested for engaging in violent activities financed by “radical groups” both inside and outside Venezuela.

Moreover, we’ve neutralized a plan that was already underway that sought to attack our public services in order to generate discontent an to [confuse] our people, primarily against water, electricity, gasoline [infrastructure], as well as against ATM machines, among others.

El Aissami also said that the authorities had “hit the terrorist cells hard”, and blamed them for causing the four-month long protest campaign that shook the country from April to August of this year.

On the VP party and Leopoldo Lopez specifically, El Aissami asserted that they were “directly connected with murderers, delinquents and criminals”, but provided no hard evidence to back up the claim. It is not clear if anyone in the VP party or if Lopez himself will be charged in connection to these accusations.

As in numerous previous occassions, El Aissami linked these alleged terror cells with the Venezuelan political opposition, which he qualified as “immoral” and “decadent”. He also blamed opposition leaders of playing victim for international audiences, saying:

… these leaders (…) promote violence and then they stand in front of the world saying that they are being persecuted. They’re actually terrorist.

Aside from being vice president, El Aissami is also the head of the National Anti-Coup Command, a shadowy security imitative that places him in control of the regime’s security apparatus.

Voluntad Popular (VP) reacted to El Aissami’s allegations this evening, asking the vice president to “stop lying” by suggesting that the party was affiliated with alleged terrorist cells.

In a written statement, VP categorically denied every accusation made against the party and its leadership by El Aissami today. In a more personal tone, the statement took aim directly at El Aissami, saying:

To El Aissami, we say this clearly: stop lying, stop judging and accusing others. It is not the members and leaders of Voluntad Popular who top the list of the OFAC [Office of Foreign Assets Control] (https://www.treasury.gov/press-center/press-releases/Pages/as0005.aspx), which includes a number of officials who have proven connections to international drug trafficking and terrorism, as well as unexplained fortunes inside and outside Venezuela which are difficult for a public official to explain.

The statement’s reference to the United States Department of the Treasury’s Office of Foreign Assets Control serves as a reminder that El Aissami has been accused of being a “prominent drug trafficker” by Washington, and that he is estimated to have amassed a fortune of over $3 billion.

Two medical students and five hospital workers were arrested yesterday after a picture that they took over the weekend in a Barquisimeto hospital made a splash on social media.

The picture shows three women presumably in labour in a waiting room inside Barquisimeto’s Pastor Oropeza Hospital. Below, the image: 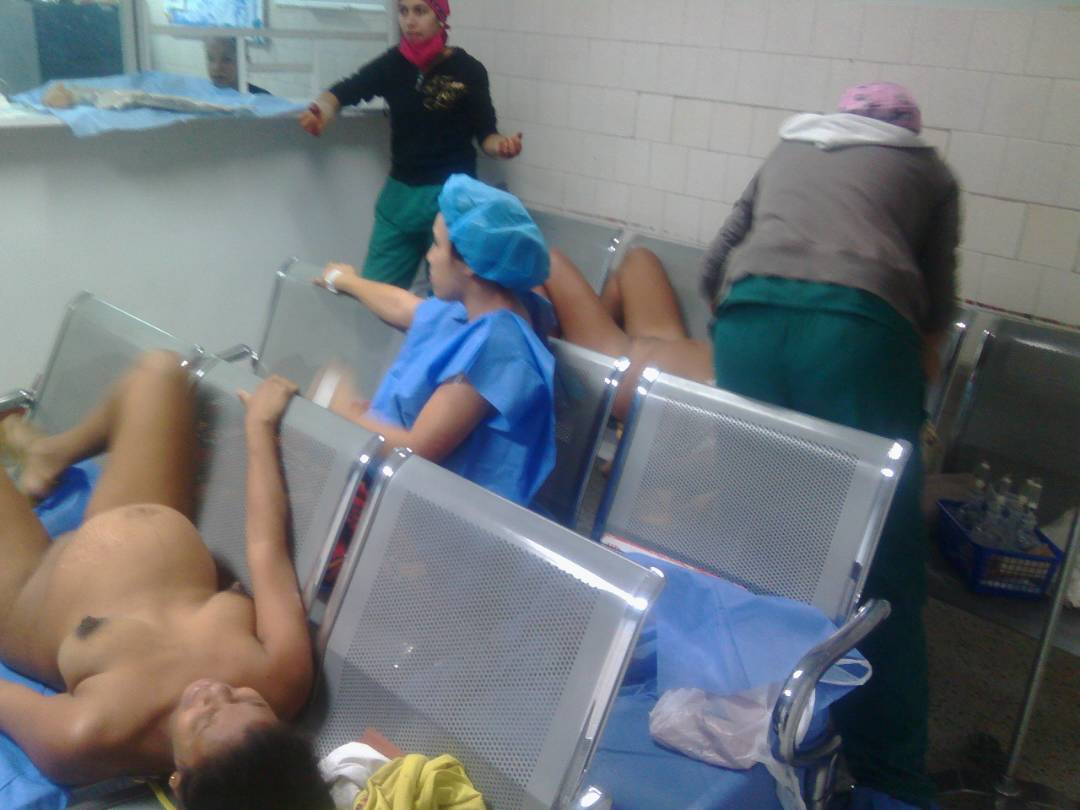 Andres Colmenares, the head of a human rights NGO called FUNPAZ, said that individuals suspected of having being involved in the taking of the picture were arrested last night by agents from the CICPC, the country’s forensic police, and the SEBIN, the political police. Colmenares said:

Agents from the CICPC and the SEBIN came to the Pastor Oropeza hospital in Barquisimeto saying that they were investigating the origin of the pictures, and they took seven people.

Colmenares said that the agents did not have an arrest warrant, but that they still detained the seven individuals and took them away for “questioning”. It is not clear what crime the individuals are suspected of having committed.

El Nacional reported last night that the two medical students were released later in the evening. The fate of the five hospital workers is still unknown.

The Maduro regime is sensitive about the images and videos shared on social media that paint the government in a negative light. In September of last year, a journalist named Braulio Jatar was arrested for sharing video on his website that showed residents of a a town called Villa Rosa booing Maduro as he toured the area.