Angry Caracas residents took to the streets outside of Mansion’s Bakery late last night to protest the establishment’s expropriation and subsequent closure, resulting in a rapid and overwhelming response by National Guard Soldiers. The bakery (blue X in the image below) is located just two blocks away from the Palacio de Miraflores, which is the seat of the Maduro regime: 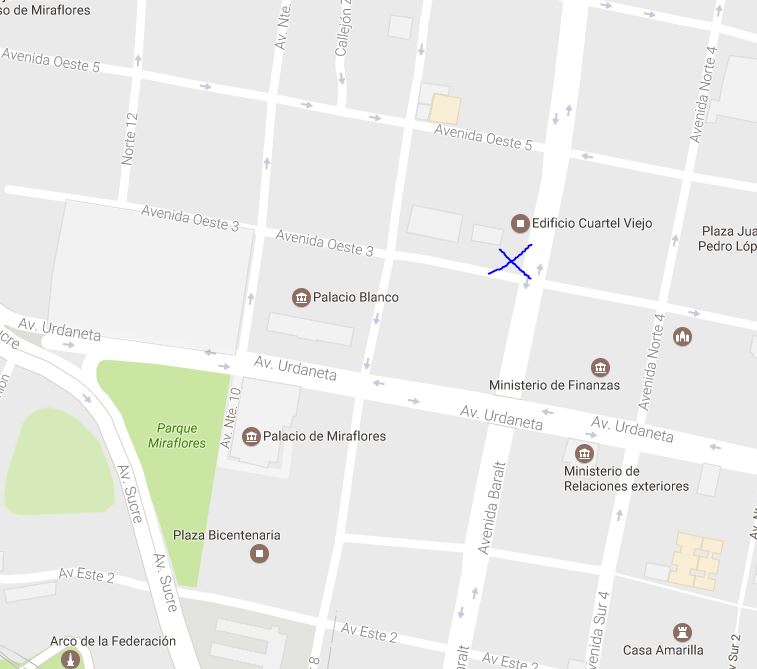 Mansion’s Bakery – now called “Minka” – was taken over by regime forces following an inspection on the establishment last week. The bakery was subsequently closed and its staff of 18 unceremoniously dismissed.

Below, videos of last night’s protest at the bakery.

Another video showing a ground view of the protest:

There is a long-standing ban on non-PSUV approved protests in the areas around the Miraflores Palace, making yesterday’s impromptu protest a rare event.

Eduardo Germán Piñate, a PSUV official, reacted to the protest this morning by calling it a “attempted takeover [of the bakery] with political goals”, and accused the protesters of acting violently.

Maduro Lashes Out at OAS, Opposition

The National Assembly approved a motion yesterday afternoon calling on the Organization of American States (OAS) to apply the Inter-American Democratic Charter to the Maduro regime in response to its ongoing human rights violations and authoritarian tendencies. However, the opposition-controlled legislature was careful to qualify its support for the application of the Charter, stressing that it did not support Venezuela’s suspension from the OAS. The qualification was made by deputy Stalin Gonzalez, who said:

We want elections, not Venezuela’s expulsion from the OAS. The government wants Venezuela to be expelled. We want Venezuela to stay in the [OAS] and that it be held accountable to its norms.

The Inter-American Democratic Charter is the OAS’ founding document, and Venezuela is a signatory. The document contains a set of guidelines that member states must abide by, as well as mechanisms for dealing with nations that fail to adhere to the guidelines. One such mechanism – Article 21 – allows for the expulsion of states that stray from the democratic path.

Maduro reacted angrily to the motion today, and stressed that Venezuela “still has democracy” while at the same time conceding that “it has not fully developed yet”. Maduro accused the opposition deputies who voted in favour of the motion of “asking for intervention… from imperialists”.

Below, a video containing some of Maduro’s comments regarding yesterday’s National Assembly motion, along with my translation:

Maduro: If they want to fight, the people will give them a fight. And if they want a battle, we will battle, and victory will be ours in the end. Sovereignty will win: this sacred land of liberators will win. Our beloved Bolivarian Republic of Venezuela. They want a fight? Let’s fight, then. Let’s do it. That’s fine.

We accept your challenge, right-wing [people]. Fascists. We accept the challenge in the name of the people. Let’s do battle over dignity, the right to peace, sovereignty, and Venezuela’s sacred life. Alright? We’re ready. Let’s see how far you can last, you cowards, you wretches. You’re cowards and wretches. Saying that the sacred constitution of Venezuela doesn’t mean anything and that it’s less than some documents that are out there in the world is open, criminal treason against the Venezuela people. There is nothing above the constitution in Venezuela.

Maduro’s argument that the constitution of Venezuela somehow supersedes the country’s obligations under the Inter-American Charter of Human Rights is counter-factual. Article 19 of the constitution clearly states that the Venezuelan state must adhere to any international human rights documents that it has signed and ratified, which could include the Inter-American Charter (emphasis mine):

Article 19: The State shall guarantee to every individual, in accordance with the progressive principle and without discrimination of any kind, no renounceable, indivisible and interdependent enjoyment and exercise of human rights. Respect for and the guaranteeing of these rights is obligatory for the organs of Public Power, in accordance with the Constitution, the human rights treaties signed and ratified by the Republic and any laws developing the same.

Caracas was hit by a gasoline shortage today, causing long lines and frustration at many of the city’s gas stations. El Nacional reports that its journalists witnessed lines at gas stations in the neighbourhoods of Las Mercedes, Chuao, Los Palos Grandes, La Castellana, Los Dos Caminos y La California, among others. The newspaper also reports that many gas stations, completely out of gas, were forced to close early today.

Since yesterday afternoon, the only gasoline left in the country is 91 [octane]. That’s the way it’ll be until tomorrow, we supposedly the new barrels [of 95 octane gasoline].

The same article claims that the city of Puerto Ordaz in Bolivar state has been suffering from severe gas shortages for the last four days, while Valencia, Carabobo state has been experiencing shortages of the commodity since Monday.

PDVSA, the state-owned oil company, was quick to respond to the news this afternoon by assuring Venezuelans that it had deployed “more than 200 trucks” carrying gas to stations all around Caracas.