According to a survey conducted by the Confederacion Venezolana de Industriales [Venezuelan Confederation of Industrialists] (CONINDUSTRIA), the country’s industrial activity “continues to fall in general terms”.

65% of industrial representatives polled noted that production in their respective fields had fallen during the second trimester of the year. When asked for the reason why industrial production finds itself in such dire straits, 87% blamed lack of foreign currency, while 86% blamed scarcity of raw materials.

The survey also found that product inventories so far this year sit at the worst level since 2004. The following industries reported lower inventories than in 2004, with the percentage of respondents in parentheses:

On average, 71% of Venezuelan industries reported having lower product inventories this year than they did in 2004.

While 38% of respondents said they believed that the rest of the year would bring more bad news for their respective industries, only 14% said that they believed things would turn around for them before the end of the year. At the time of the survey, Venezuelan industrial capacity sits at 50.49%.

As an example, Germandia mentioned the biometric scanning system due to be implemented later this year. The system will not boost production, nor will it speed up the acquisition of foreign currency for imports; rather, it will simply regulate the quantity of products Venezuelans are allowed to buy.

“It’s the effect”, Germandia said, “not the cause. The cause is not there”.

National Guard soldiers faced off against the residents of San Cristobal, Tachira once more today, after sporadic protests flared up once more around the city.

Early this morning, residents in the Las Pilas de Pueblo Nueblo began to set up barricades when they were confronted by National Guard soldiers, who attempted to disperse the protesters.

At the same time, a National Guard truck drove through the gate of the El Parque apartment complex, and then proceeded to fire tear gas into the building and its surroundings.

Demonstrators managed to hijack a city bus, but subsequently released it without incident.

Below, a video showing some of the confrontations today. The video contains several interviews. It also shows a group of National Guard soldiers moving against the protesters, starting at around 5:30 :

At 0:50, a man wearing a blue hoodie and a gas mask begins to speak. He says:

My name is Daniel Prato. We are residents from the [unintelligible] neighbourhood in San Cristobal. This morning, we decided to take to the streets peacefully against two small things. First, the illegal bus fare increase in San Cristobal, which affects the pockets of more than one Venezuelan. Second, the fingerprint scanner which is being deployed in our state for food.
We want to tell the governor and the president of the republic that we, as human beings and as members of civil society, give a resounding “no!” to this fingerprint scanning system and this illegal bus fare increase.
They attacked us with their trucks, their motorcycles, with their weapons and with their bombs. We took shelter in our homes. With their trucks, they brought down the gate to our apartment complex. We have evidence, Governor Vielma Mora and President Nicolas [Maduro]. We have to tell you that this is not how you attack a people. We are going to continue to take the streets in peace in a show of resistance.
Tachira is in a state of resistance. The is just the beginning.

At 3:20, a woman facing away from the camera says:

Basically, it was 4:20 AM, when suddenly we started to hear explosions. I was asleep. I looked out the window and saw three [National Guard] trucks driving by in front of the building. Suddenly, they tried to enter the building by crashing into the gate three times in a row until the brought it down. Then, they continued to attack the residences.
There were three National Guard trucks.

Well, to scare us, to terrorize. We’re here sleeping and they invade our property. They violate our building, violate our privacy, and we’re terrorized. Children live here, elderly people and families live here. Every time they attack us, every time they use tear gas they hurt all those people. The children, we have to take them out of here quickly, we have to take them to clinics. These are things that we are asking them to put an end to, because they cannot continue to take place.

At 8:10, a National Guard soldier and the man recording have an exchange of words:

Solider: … move to the other side.
Man: Why should I, brother?
Soldier: ‘Cause I want you to.
Man: What? I have to move because you want me to?

The protests in San Cristobal today appear to have encouraged at least two disturbances, both of them in Caracas. Below, a demonstrator is detained by security forces after a demonstration in Santa Fe:

This evening, at least one fire barricade appeared in Chacao: 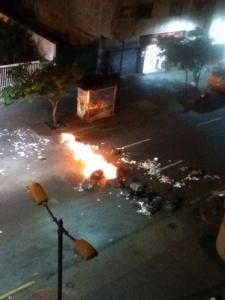